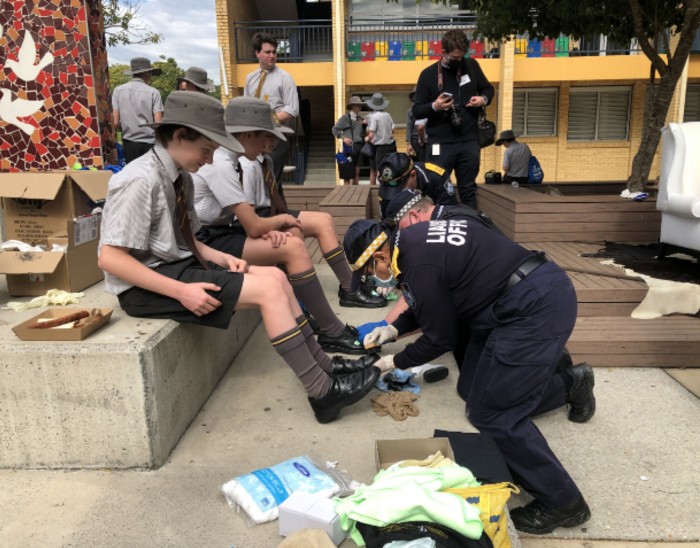 The Padua College at Kedron welcomed police and Police Liaison Officers from the North Brisbane District, the Mounted Unit and the Police Pipes and Drums for ‘Give Brain Cancer the Boot’ on 15 July 2021.

‘Give Brain Cancer the Boot’ is a shoe-shining fundraising event, which aims to raise awareness and donations for brain cancer and its research. Padua students have their shoes shined by attending police, ARMY, sporting stars, college staff and senior students at the cost of a donation to the cause.

Acting Chief Superintendent Christopher Stream was only required to shine one set of shoes, but he tirelessly continued to polish a number of other students shoes of his volition.

During the event, the Police Pipes and Drums played their incredible tunes and provided an uplifting atmosphere to the event. The Police Mounted Officers and their two police horses, Geronimo and Felix, also played soccer with the students.

The event came to fruition through the dedication of Kerri McKinless, who is the wife of serving The Gap Station police officer, Senior Constable Brendan McKinless, who was sadly diagnosed with brain cancer (Oligodendroglioma) approximately three years ago. He went through three separate surgeries, extensive chemotherapy and radiation therapy.

All donations raised during the event will go to Carrie’s Beanies 4 Brain Cancer Foundation which aims to raise funds towards research into brain cancer. It was founded by journalist and Gold Logie award-winning television and radio presenter Carrie Bickmore, whose husband Greg passed away in 2010 after a decade-long battle with brain cancer.